In this episode, we have a very special guest who joins us to share one of her favorite ways to cook the Sicilian classic, chicken marsala.  My daughter Christina Lombardo Seiler visited me from where she lives in San Diego and while she was here we filmed Episode 8  of the Cooking with Mama Lombardo Show.

It’s always special when you get to cook with your daughter, especially when it’s a recipe she has learned how to cook so well.  In fact, chicken marsala is not a recipe that I normally have cooked over the years, despite the city of Marsala being only about 45 minutes from where my parents came from.  Marsala wine is a wine that we often drank growing up, and is the most famous fortified wine coming from Italy.  Marsala comes in either in a dry or sweet variety, either of which you can use in this recipe. 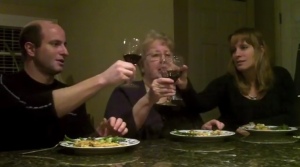 Chicken marsala is a perfect recipe for the Cooking with Mama Lombardo Show: simple, authentic, delicious and fun.  We hope that you’ll give it a try!

The ingredients you will need for chicken marsala include: 2-3 chicken breasts, 1/2 cup of flour, 4 tablespoons of butter, 1 cup of marsala wine, 3 cups of sliced mushrooms, salt, pepper, 1 cup of chicken broth, and chopped chives.

Tenderize your chicken breasts, by pounding them with a tenderizing tool.  Mix the flour, salt, pepper and some dried oregano (optional) in a dish.  Dredge the chicken breasts in the flour so that you have them covered all over in flour.

Heat a medium size skillet on medium heat.  Add 1-2 tablespoons of butter. When melted, add the chicken to the pan and cook until golden brown on each side.  Be careful not to burn the chicken.  Once golden brown, take the chicken off and put on a plate.

While the pan is still hot, add another tablespoon of butter.  Add the sliced mushrooms into the pan and spread them out evenly over the pan.  Next, add the marsala wine into the pan, along with the chicken broth.  Add another tablespoon of butter.  Bring to a low boil, and then add the chicken into the sauce.  Cover the chicken and let it simmer for about 8-10 minutes.   If you would like to thicken the sauce up, you can take some of the excess flour and add it to the simmering sauce.

Once finished, take the chicken out of the pan and serve on a plate.  Add some mushrooms and sauce on top.  Sprinkle a dash of salt and pepper, and then add some chopped chives for garnish.  That’s it!  Serve with some marsala wine and enjoy!